From the print edition, The Economist
November 2013

Are children fair game for sophisticated and relentless marketing techniques? Many countries think not 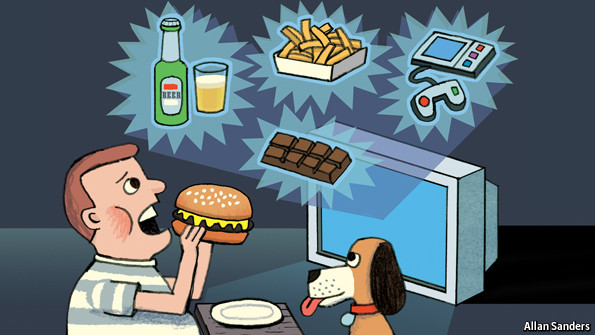 WHILE her husband’s health-care plans founder, Michelle Obama is pressing ahead with her own. Last month, joined by Rosita, a turquoise Latina muppet, and Elmo, a shaggy red one, she announced that Sesame Street’s puppets would promote fruit and vegetables rather than sugary and fatty fare; Cookie Monster may need to find himself a new job. Mrs Obama’s fight against childhood obesity has several fronts (she calls it “Let’s Move!”) but marketing is an important one. In September she convened the first White House meeting on marketing food to children. Their preferences “are being shaped by the marketing campaigns you all create”, she told the assembled executives. “And that’s where the problem comes in.”

To market anything that might appeal to young consumers is to risk a scolding. Advertising entices children to drink and smoke, makes them fat and sexualises them early, its critics allege. To tout even wholesome products to children, some claim, is to exploit their naivety and thus to deceive them. Crusaders like Mrs Obama have helped embarrass companies. Coca-Cola said in May that it would not advertise to children younger than 12 anywhere in the world. Last year Disney promised not to promote junk food on television programmes for children.

Such gestures make the best of an increasingly constraining climate. Some of the many restrictions on the marketing of tobacco and alcohol were imposed with youngsters in mind. In America and the European Union big food manufacturers follow self-imposed codes of conduct on marketing to children. These are to be tightened. Some European countries impose stricter regimes. Britain bans advertising on television and radio of food high in fat, salt and sugar to children under 16. Sweden and Norway outlaw all television advertising to youngsters. Quebec prohibits advertising of any sort directed at children.

Will Gilroy of the World Federation of Advertisers notes a “surge” in regulatory activity since 2011, when the United Nations held a conference on non-communicable diseases in New York. Mexican children see 12,000 junk-food adverts on television a year, more than in any other country, a government commission complains. Having slapped taxes on junk food and sugary drinks, Mexico now plans to ban adverts for them in the afternoons and evenings and at weekends. In June Taiwan gave regulators authority to restrict the marketing and even the sale of food they deem unhealthy for children.

As standards tighten, arguments rage. Is too much marketing still getting through to children? Are companies like Coca-Cola and McDonald’s, which in September promised to stop putting fizzy drinks on its “Happy Meals” menus, cynically determined to hook children in other ways? Should more jurisdictions impose Quebec-like bans? Or extend protection to children older than 12 or 13?

Pinning down how advertising might harm children is tricky. One line of inquiry studies its effects in the lab. Such experiments suggest that children eat more in response to food promotion. British children who saw footage of Gary Lineker, who helps advertise Walkers crisps, doing his other job as a football commentator ate more crisps than a control group. Other types of study try to capture marketing’s effects on whole societies. An American one found that young people who saw one additional alcohol advert per month (beyond the average of 23) drank 1% more alcohol. Some research connects media consumption and weight. A 2005 study of teenagers in 34 countries found in 22 of them a correlation between their body mass index and the amount of television they watched.

Such correlations do not prove that advertising causes obesity. Food and beverage producers have a point when they claim it is one factor among many. But still one to be dealt with: “We should be tackling all the causes of obesity, however small,” maintains Emma Boyland, a psychologist at the University of Liverpool, one of the authors of the Gary Lineker study.

Some radical critics argue that any sort of marketing aimed at children damages them. It is wrong to treat children as “economic objects”, says Bill Jeffery of the Centre for Science in the Public Interest, a group that campaigns for good nutrition in America and Canada. Young children do not grasp that they are being advertised to; marketing to them is thus inherently deceptive. It undermines “creative play”, which stunts development and ultimately threatens democracy, insists Susan Linn of the Campaign for a Commercial-Free Childhood, an American group.

To such critics, any system of control that depends on companies policing themselves is doomed to fail. Industries set the bar too low, exploit loopholes and find ways to broadcast their toxic messages. “Self-regulation simply does not work in a highly competitive marketplace”, contends the International Association for the Study of Obesity.

In America 18 companies are involved in the Children’s Food and Beverage Advertising Initiative (CFBAI). They account for 80% of food adverts on children’s television and promise to advertise “healthier or better-for-you” foods to children younger than 12 or, in some cases, not to market to them at all. The “EU Pledge” is a similar European commitment by 20 big firms.

But their definition of children’s television does not include programmes broadcast to audiences in which less than 35% of viewers are under 12. That leaves out shows like “American Idol”, watched by hundreds of thousands of children, points out Jennifer Harris of the Rudd Centre for Food Policy and Obesity at Yale University. Companies define “healthier” more liberally than public-health experts think right. Kellogg’s markets Froot Loops cereal to children even though each serving has four times the sugar of a bowl of Corn Flakes. The pledge-signers treat 13-year-olds as grown-up enough to respond sensibly to advertising; the critics say the age of marketing reason is higher. 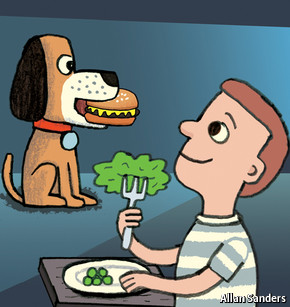 Digital marketing offers new ways of reaching children for less money. Brand-boosting “advergames”, can be more compelling than conventional commercials. Such techniques are “outside the scope of most regulatory and self-regulatory” regimes, says João Breda of the World Health Organisation.

Even where the state lays down the law, product-pushers get through. Broadcasters based abroad air popular children’s programmes in Sweden and Norway, bypassing their advertising bans.

Most governments would rather co-operate with businesses than confront them. Taiwan’s new law and Mexico’s proposed one give governments the whip hand. Closer to the norm is Singapore: its health ministry is to lay down guidelines for a code of conduct to be followed by firms. Norway, often a champion of tough controls, backed away last spring from a proposal to ban advertising of unhealthy food to people younger than 18. Instead it has given the industry two years to enforce a ban on marketing to children under 13, backed by a threat of legislation if it fails.

This was a blow to prohibitionists. But pressure on the industry may be having an effect. The companies behind the EU pledge say that children’s exposure to junk-food marketing on television was 48% lower in 2012 than in 2005. In America spending on food-marketing to the young fell by 19.5%, from 2006 to 2009 to $1.79 billion, according to the Federal Trade Commission (though spending on online and “viral” marketing surged 50%). Self regulation is tightening up. The EU pledge has covered company-owned websites since the end of 2011, and will introduce uniform nutritional standards for its members from next year. The CFBAI plans common standards at the end of 2013.

Packaged foods are becoming more wholesome, in part because consumers are demanding it. American cereal-makers, for example, have cut sugar and added whole grains. From 2007 to 2011 sales of better-for-you food and drink produced by 15 big companies accounted for 72% of sales growth, according to a study by the Hudson Institute, a think-tank. The profit motive will do more to raise nutritional standards than threats of draconian regulation, suggests Hank Cardello of the institute’s Obesity Solutions Initiative.

The argument over whether such progress is fast and far-reaching enough hides disagreements about how resilient children are, whether marketing has a bright side and whether it deserves the protection given to other forms of speech. Campaigners point to children’s vulnerability; marketing folk highlight their shrewdness. Consumerism is not inherently corrosive, advertisers say: their craft promotes choice, and thus responsibility. Without advertising you end up with the “people’s toy” of Soviet-era planned economies, says Ian Twinn of ISBA, which speaks for British advertisers.

Activists believe rule-makers should adopt the “precautionary principle”: protecting children trumps other concerns. Marketers urge “proportionality”, giving weight to other interests like competition and profit. In most countries proportionality seems to be winning. That is probably a good thing. But you need first ladies to keep the pressure on.

GarryMichael continually monitors the regulatory landscape for federal agencies and their contractors. For questions about how your organization can adapt to the new FISMA requirements, contact us today.

Read more about GarryMichael
In the News >>